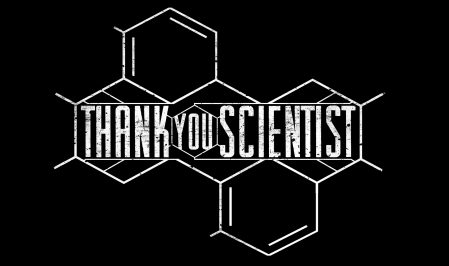 Thank You Scientist is an American Progressive Rock band from Montclair, New Jersey, United States.  Their debut studio album, Maps of Non Existent Places was named Revolver Magazine “Album of the Week” in October 2014.[3] Their second album, Stranger Heads prevail was released in July 2016. Their third album, Terraformer was released in June 2019.

Thank You Scientist was formed at the New Jersey Montclair State University’s music program when guitar player, Tom Monda met saxophonist, Ellis Jasenovic and trumpet player, Andrew Digrius. Their musical taste for Frank Zappa, Harry Nilsson, The Beatles and Mahavishnu Orchestra would later become an influence and a seed for Thank You Scientist.

In 2009, vocalist, Salvatore Marrano (former vocalist of NJ rock powerhouse “Hello Eden”), bass player, Greg Colacino, drummer, Odin Alvarez and violin player, Ben Karas joined the band, which became the original lineup for Thank You Scientist. The band self-released their “The Perils of Time Travel” EP in 2011, followed shortly after by their first full-length album “Maps of Non-Existent Places” in 2012. This album caught the attention of Claudio Sanchez, vocalist and guitarist for the progressive metal/rock group, Coheed and Cambria and founder of Evil Ink Records, who signed the band into the young record label in summer 2014. It was the first band the label signed. A music video for “My Famed Disappearing Act” was released in August 2014.

The deal opened multiple doors for the band which soon started touring with Periphery in 2015, and with Coheed and Cambria later that year.  Bass player Greg Colacino left the band that year and was temporarily replaced by James Robbins for their 2015 tour and later on by Cody McCorry of Karmic Juggernault. Touring put new pressure on the band which announced on September 2017 that Odin Alvarez, Ellis Jasenovic, and Andrew Digrius would leave the band, and were to be replaced by Joe Fadem on drums, Sam Greenfield on sax, and Joe Gullace on trumpet. In 2017, their song “Psychopomp” was included in Bluecoates Drum and Bugle Corps show “Jagged Line”

They announced their next album, Terraformer, on April 5, 2019 and released the first single off that album, “FXMLDR” (pronounced as Fox Mulder and inspired by the television series The X-Files), on April 13. The album was released June 14, 2019. The band also released a video for “FXMLDR” made with solar equipment and in conjunction with Bluecoats Drum and Bugle Corps.