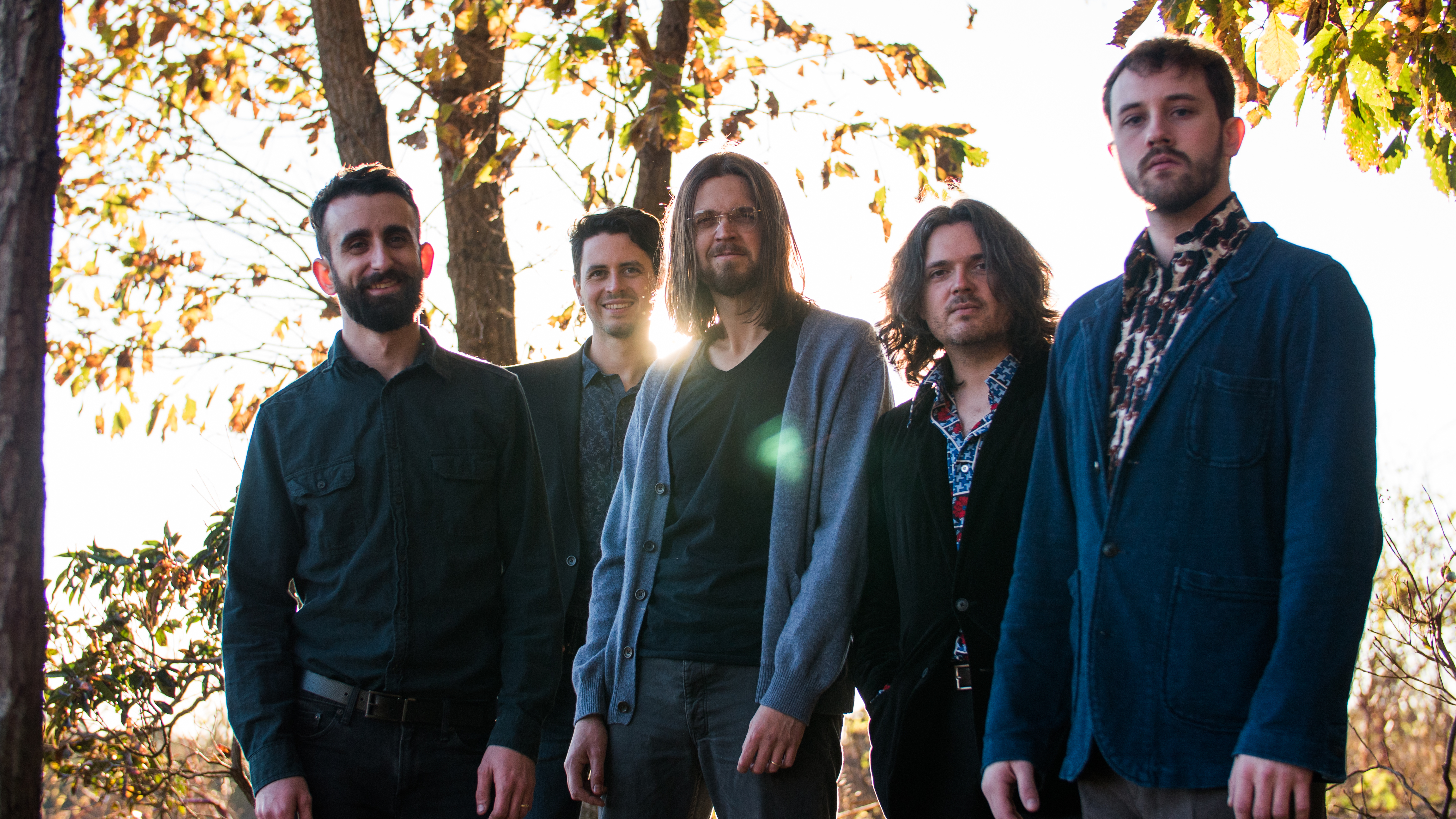 The Tea Club is a band about feeling. Their music is earnest and impassioned, combining elements of art-rock, folk, electronica, and romanticism to create a sound all their own.

The band is fronted by the songwriting team of brothers Patrick and Dan McGowan whose unorthodox guitar playing and fervent singing form the core of the group’s unique style. Bassist Jamie Wolff and drummer Dan Monda draw upon their shared love of dynamics and melody to create a raucously sophisticated rhythm section. Joe Dorsey helms the keyboards and brings boundless energy, virtuosity, and a forward-thinking approach to the compositions.

Their latest record, if/When is daringly personal, exploring themes of death, failure, new life, and hope. Complex and cerebral, unguarded and intimate, If/When is a thoroughly heart-felt addition to the band’s immersive catalog.

“The writing process was unlike anything we’ve ever done before,” said Dan McGowan about the making of If/When. “We experienced a lot in our lives as we were writing and recording this album. There were deaths, births, marriages, and job losses. We went through depression, anxiety attacks, acts of courage, sentimental joy, personal failures, and life-affirming highs. We took a very cathartic approach with the music and lyrics, trying to really feel our feelings, from fear to rage, grief to elation,”

“Many of the themes across the record deal with battling dichotomies like cynicism and hope,” said keyboardist Joe Dorsey. “I think the album cover is like a Rorschach test in that way. I also believe there are some accidental archetypal themes that appear across the record, but I’ll let the listener discover those for themselves”

“We took some risk with this one,” added Patrick McGowan. “It’s risky as hell. We tried new things, pushed ourselves in new directions, shone some light into unfamiliar corners, and had a blast doing it.”

The band has been taking risks from the beginning. “The Tea Club are not afraid to nail their colors firmly to their mast and fly directly into the face of fashion.” said Organ Magazine. Brooklyn area musician and poet DJ Mojo echoed a similar sentiment upon first hearing the band: “The Tea Club have restored my faith in Real Musicians creating Real Music… a clear dedication to sharing their inside feelings with the audience without falling into the ‘Musician-As-Savoir’ stereotype.”

Micah Rolling of Progarchives.com agreed: “Truly, I have not heard another band quite like them… This is a prime example of what actual passion and love for originality in music can bring.: In 2003, Patrick and Dan McGowan started the band to fill a void. “We were looking for a new and interesting music of a certain emotional quality but weren’t finding much of it, “recalled Patrick, with a generous smile. “So, we decided to make some ourselves.”

They released 4 self-produced EP’s, one of which caught the attention of renowned punk, metal, and hardcore producer Tim Gilles from the legendary Big Blue Meenie Studios in Jersey City, New Jersey.

“Meeting Tim Gilles and working at Big Blue Meenie was a major milestone for us,” said Patrick. “We learned so much it’s almost impossible to put into words. Tim encouraged us to push ourselves and continually hone our craft, but to never lose sight of the simple love we have for making music together”.

The studio records have garnered much critical praise. Indie-Music.com said: “…The Tea Club manage to achieve something almost as rare as unicorn sightings – marrying an enjoyable, agreeable sound with uniqueness, artistry and creativity…”

Raffella Berry from Fire of Unknown Origin: One of the most interesting and original acts of the contemporary progressive rock scene.” And author Jerry Lucky said: “Once again I find myself almost at a loss for words other than to say if you’ve never listened to the Tea Club you MUST check them out. They get my highest recommendation…”

The band performed hundreds of shows, supported leading-edge bands Haken, Bent Knee, and Thank You Scientist, and have toured the American Est Coast, Midwest, and parts of Canada. As a live unit they’ve earned a reputation for the intensity and their sincerity. Dan Burke from The Progressive Aspect had this to say after a recent performance: “At the end of the show I went over to congratulate the band on what I felt was one of the most inspired evenings of live music I’d ever witnessed. As I approached…I realized I couldn’t’ even speak as I was so emotionally charged by what had just occurred.”

In the winter of 2019 the band entered a new studio with a new producer and a new vision for the future. “As hard as it was to imagine, our time at Big Blue Meenie had come to an end,” said Patrick. “But we were writing a lot of new material and a new record was beginning to take shape. We started looking at studio’s ad producers, one of which was Jeff Adderman at Big Blue North. Jeff had done some engineering on our previous record Grappling and we really enjoyed working together during those sessions. He has a lot of interesting ideas about the band and what we could do going forward that I felt was really exciting. So, we made the 6 hour drive up the studio to do some demos and at that point it became very apparent this was the guy to do the next Tea Club Record.”

“We knew going into it that we wanted to do something new and different,” added Dan. “Jeff helped give us the encouragement to go to some places that we felt like we couldn’t go, but we wanted to go. He was always trying to get us to trim the fat of a song, to get rid of what’s unnecessary and to experiment.”

Bassist Jamie Wolff agreed: “There was a lot of consideration about how the parts serve the whole. I feel we struck a healthy balance of exploration and deliberation, keeping the cohesion of the songs in mind. The challenge was for everything to have a purpose”

“We really just tried to set aside all the preconceived attributes of a ‘prog’ album and focused solely on creating a meaningful statement.” said drummer Dan Monda.

With the release of If/When, The Tea Club continue to explore new ways of communicating authentic feeling through their art.

“The music deeply relates to the shared experience of life,” concluded Wolff. “Sorrow and joy, hopelessness and hope, death and birth. My hope is that the music can be a way for listeners to connect with the all-encompassing beauty of life, and that it can work against the tides of alienation in the world.”

If I Mean When

The Tea Club – The Magnet (Live in Studio)